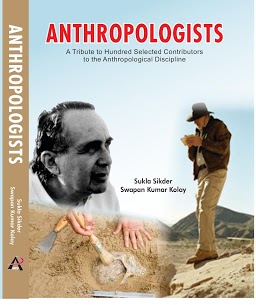 Anthropologists A Tribute to Hundred Selected Contributors to the Anthropological Discipline

Title: Anthropologists A Tribute to Hundred Selected Contributors to the Anthropological Discipline

Anthropology as a discipline is something more than whatever has been considering by most of the learner of Anthropology or of other disciplines. As per the visionary depth of this vast discipline, everything on the earth or surrounding the earth related to human are the matter of concern for Anthropology and Anthropology studies all the things through the lenses of time and space regardless of society and culture. While the visionaries say Anthropology began from the time of generation of the environment and then on the commencement of life on the earth which, consequently contributed to the appearance and development of man on the earth through the gradual process of evolution both biological and cultural. Anthropology can trace its association everywhere with human activities and human thoughts and has something to contribute in these spheres. Though formal recognition and institutional association to the discipline came late Anthropology was everywhere on the earth even before it has been named. Nevertheless, the formal framework of Anthropology derives Anthropology as the science or the study of man and it studies the emergence and development of man from physical, cultural and social points of view. Present formal discourse enunciates that Anthropologists are Anthropological thinkers. Anthropologists seek the answer to an enormous variety of questions about humans. They are interested in unveiling when, where and why humans appeared on the earth, how and why they have changed since then, and how and why modern human populations vary in certain physical features. Anthropologists are enthusiastic to understand how and why societies in the past and present differentiate in their customary ideas and practices. There is both theoretical and practical or applied aspect of anthropology. Theoretical anthropologists delineate conceptual model, theories and explain the rationale behind human acts. While applied anthropologists put anthropological methods, information and results to use, in efforts to solve practical problems. Anthropology as a separate discipline appeared too late in comparison to other social sciences. The discipline was learned under different social sciences because, in the beginning, given to its diverse interest, it was difficult to decide the subject matter of anthropology. Now anthropology has emerged as a full-fledged discipline of teaching and research. The subject owes to the anthropologists, whose theories and contributions have given rise to anthropological thought and gave onwards establishment to the discipline, anthropology.

Ms Sukla Sikder (b. 1989), M Sc. in Anthropology, Senior Research Fellow of University Grants Commission (UGC), India. She is a Teaching Assistant under the UGC doctoral program in Anthropology in undergraduate and postgraduate level at West Bengal State University WBSU).  Ms. Sikder has worked as a Project Fellow in the Indian Statistical Institute, Kolkata and also in WBSU. She has published a book, a number of research articles in peer-reviewed journals and presented papers in various National and International seminars conferences in India and abroad. Ms. Sikder has also completed many National and International workshops and Faculty Development Programs. She is life member of Indian Science Congress Association (ISCA), Kolkata and Indian Anthropological Society (IAS), Kolkata. Her areas of research interest include Gender Studies, Child Health and Nutrition, Ethno-medicines, Tribal studies and issues of Anthropological concern..

Dr. Swapan Kumar Kolay (b. 1966) has obtained M.Sc. (1992) and Ph.D (1999) in Anthropology from the University of Sagar, M.P. He has done Post Graduate Diploma in Rural Development from Indira Gandhi National Open University. Dr. Kolay got both Doctoral & Post- Doctoral Research Fellowship from Ministry of Tribal Affairs, Govt. of India, New Delhi. His worked with Cultural Research Institute, Kolkata; A. N. Sinha Institute of Social Studies, Patna; Department of Anthropology, University of Delhi and Indian Institute of Forest Management, Bhopal. He has rich research experience in conducting Tribal development, Tribal health and Natural resource management based research on 20 different tribes in 15 states in India. He was attended and organized many workshops, training programme and National and International level seminars. He is a life member of a numbers of academic associations including ISCA, Kolkata; IAS, Kolkata. Dr. Kolay published more than 50 research articles in different National, International journals and books to his credit. At present he is Associate Professor & Head, Department of Anthropology and Tribal Studies and Dean of Student Welfare, Bastar University, Chhattisgarh.