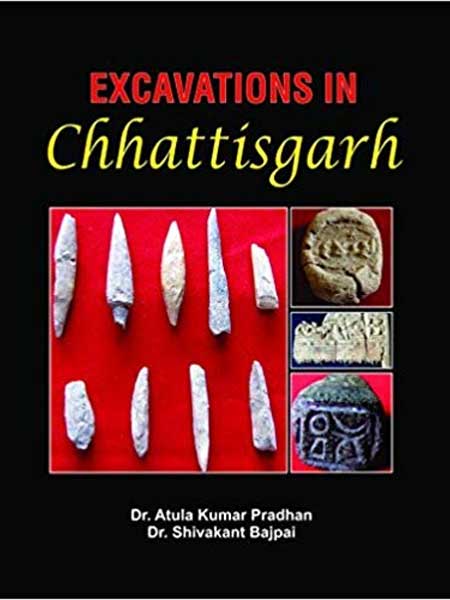 This book contains the result of archaeological excavations conducted in Chhattisgarh. It deals about the important antiquities, cultural sequence and their critical analysis which are retrieved from the excavations. In this book an attempt has been made to produce line drawings and photographs of major antiquities and structural remains.

This book contains the result of archaeological excavations conducted in Chhattisgarh. It deals about the important antiquities, cultural sequence and their critical analysis which are retrieved from the excavations. In this book an attempt has been made to produce line drawings and photographs of major antiquities and structural remains. The contents in this book have been classified into five chapters which deal Geographical Background, Historical Geography, Historical Background, Excavated Sites and Excavations in Chhattisgarh: At a Glance. The book will be helpful to the research scholars, teachers and students of archaeology and history of university and college level. For the general readers, who are not familiar with this subject, this book will, no doubt, provide an idea about the archaeological activities in Chhattisgarh. Dr. Atula Kumar Pradhan was graduated from the Utkal University and did his M.A. in Ancient Indian History, Culture and Archaeology in the same university of Bhubaneswar. He obtained his degree of Doctor of Philosophy from Utkal Univeristy, Bhubaneswar and PGDA from Institute of Archaeology, Archaeological Survey of India. His Ph.d is on Maritime Traditions of Odisha: An Archaeological Study (From earliest times to 13th C.A.D). He participated in the explorations at Brahmani Valley (Odisha), Chaturbhunath nala (Mandasur, M.P.) Malaprabha river (Karnataka) and Haup river valley (Chhattisgarh). He actively participated in the excavation works at Kayama, Deuli, Radhanagar (Odisha), Harappan site Bhirrana (Haryana) and Pachrahi,Tarighat and Damru (Chhattisgarh). He published three books and more than fifty articles in various national and international journals. He edited various journals and proceedings. He attended various national and international seminars and workshops. He visited Srilanka, Tibet, and Nepal in course of his research work. He delivered lectures on archaeology in various universities and institutions. He is the life member of various historical and archaeological societies i.e. Indian Archaeological Society, Centre of Research and Training in History, Archaeology and Palaeo Environment (New Delhi) Rock Art Society of India (Agra), Indian History Congress, (Delhi), Orissa History Congress (Bhubaneswar), Art History of Congress (Assam), Andhra Pradesh History Congress, Indian Numismatic Society (Banaras), Indian Society of Buddhist Study (Jammu) and Indian Epigraphical Society (Maysore) etc. Now he is working in Directorate of Culture and Archaeology, Government of Chhattisgarh, Raipur.