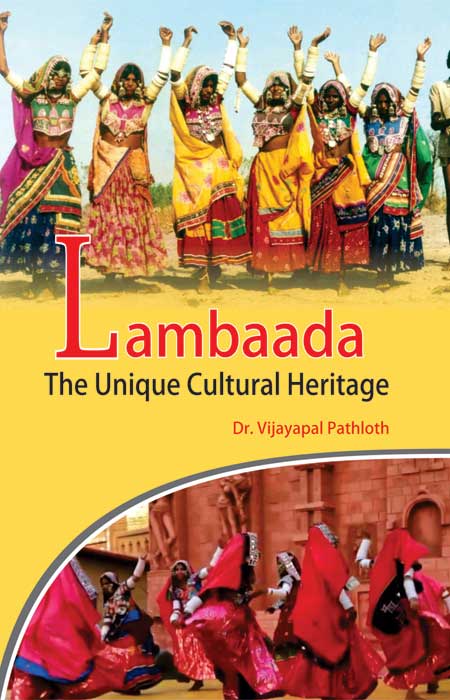 India has numerous cultures and traditions, different languages, different climatic conditions, different kinds of forests, different mountains etc and also numerous tribes spread all across the length and breadth of India. Lambaadas or Banjaaras are one such tribe who are the nomadic tribes migrated from Rajasthan and settled at various places across India. The Lambaadas or Banjaaras are the tribes who have settled in the states of Telangana, Andhra Pradesh, Karnataka and Maharashtra. They are considered unique amongst the other tribes across India, in terms of their life style, dressing, festivals, language, music, dance etc. The Lambaada dressing and especially the embroidery work is world famous and is part of today's fashion designing.

The book Lambaada  The Unique Cultural Heritage tries to bring out the unique features of the rich cultural heritage of the Lambaada tribes to promote and propagate it across the globe. This book highlights on the origin of these tribes basically from Ghor province in Afghanistan to the state of Rajasthan in India and from there to the other parts of the country especially to the states of Telangana, Andhra Pradesh, Karnataka and Maharashtra. It discusses the mythological aspects pertaining to the origin of Lambaada Tribes, historical aspects, their physical characteristics, formation of clans among the Lambaadas and about the migration of Lambaadas and their settlements especially in Telangana and Andhra Pradesh, Lambaadas known by different names in different places, their profession, spirituality, traditional councils, livelihood and occupations, literature, Lambaadas in the medieval, modern and the contemporary period besides environmental sanitation, economy, administration, social structure, language and literacy, leisure and recreation etc. It also discusses about the social customs and beliefs, family organization and their relationships, administration and their clan lineage, dwellings, settlements, food habits, tattooing, birth ceremony, traditional marriage, death ceremony, concepts of heaven, hell and re-births, beliefs in evil spirits, witchcraft and sorcery, various festivals - both the traditional and general/ regional. It discusses about the Lambaada dances on different festivals and fairs, music and musical instruments used, costumes and ornaments, the footwork and hand movements, contemporary changes etc.

This book is a cultural study of Telangana and Andhra Pradesh and hence certain terminologies are sometimes referred in the Telugu dialect. The word Lambaada is most commonly used to refer these tribes and hence it is most prominently used while writing this book.

Dr. VijayapalPathloth is an internationally acclaimed and leading exponent of Dance from South India. He hails from a tribal background from the state of Telangana. A versatile performer, he is perhaps the only artist from the tribal background who is expertise in both Academics and Dance performances. He is recognized for his scholarly, yet enthralling portrayal of the arts. He has to his credit several performances ranging from sacred to the secular. He is known for his thorough research, creative choreography, sensitive presentation and aesthetic portrayal.

An exceptional artiste of today's generation, Dr. Vijayapal is an accomplished, prolific and promising dancer, who aspires to reach the higher standards of perfection in the field of Dance.  Today, he is acknowledged as one among those few noteworthy male dancers, who have made a niche in the world of dance carrying forward this vibrant dance tradition.

He has a long list of highly enthralling and appreciated performances and lectures in several prestigious National and International platforms. He has toured extensively in India, UK, USA, Europe, Malaysia, Singapore, Pakistan, Oman etc. He is known for his winsome stage presence and enchanting presentation. His versatility as an artiste helps him to bring to life exquisite performances as a solo, duet, group and dance dramas on various prestigious National and International platforms. He has essayed several lead roles in different Dance drams and his ability to portray different roles and characters has won him several opportunities to perform individually and with many eminent and noted artistes and gurus of the highest caliber.

Dr. VijayapalPathloth is a multifaceted talented artiste, who wears multiple hats with ease. Besides being an Academician, he is a Dance performer, Art educator, Choreographer, Dance Therapist and a Research Scholar who endeavors to make an impact on the social and cultural lives by sharing his expertise in the field of art. He is recognized for his scholarly, yet enthralling portrayal of the arts.

Besides being a recipient of several awards and titles and a graded artiste of Doordarshan, he stands apart amongst his artistic peers for his excellence in academics. Dr. Vijayapal has a strong foundation in both theory and practice of dance too. With a PhD in Dance from Hyderabad Central University, he holds Masters Degree in Dance and Business Management, and MPhil Degrees in Dance and Tourism Management. He is the recipient of a Gold Medal for his significant work in MPhil Dance and has qualified NET and JRF from UGC, Government of India. He is currently working as a faculty in the Department of Dance, PottiSreeRamulu Telugu University, Hyderabad.  He has published papers in National and International Journals and books and has also conducted seminars and workshops on dance at various places furthering his academic pursuit.

Expressing the language of soul with subtle yet powerful expressions; graceful yet stern footwork is DrVijayapalPathloth - The Dancing Marvel.