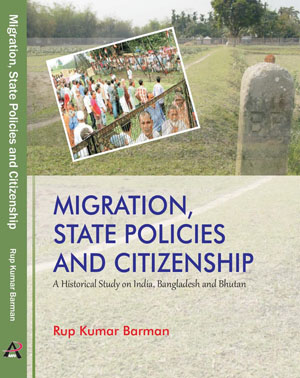 Citizenship is considered to be a fundamental right of an individual within the boundary of state of his/ her origin. The democratic countries of the world thus have ensured right to citizenship in their constitutions. But citizenship has remained a contested one for a considerable number of forced and voluntary migrants of the South Asian countries as well as for the dwellers of the Indo-Bangladeshi enclaves [popularly called chhitmahals]. After critically analyzing the historical development in India, Bangladesh, Myanmar and Bhutan, this book has examined the constitutional provisions of citizenship, citizenship acts, nature of statelessness, and nation building process in India, Bhutan and Bangladesh with a perspective of migration studies.

Dr. Barman has authored several research papers and nine books. Among them- From Tribalism to State (2007), Contested Regionalism (2007), Fisheries and Fishermen (2008), Partition of India and Its Impact on The Scheduled Caste of West Bengal (2012) , Jatpat, Jati Rajniti O Dalit Pratarka (2019), The Origin and Evolution of the Enclaves of India and Bangladesh:  A Historical Study (2019), Nature, Communities and State: An Environmental History of Bengal and Assam (2019), Practice of Folk Medicine in Sub-Himalayan Bengal: A Study on the Folk Medicinal Practices of the Rajbanshis in Historical Perspective, ( 2019) ; are noteworthy. At present he is working on Dalit Discourse, and history of rivers of South Asia.